What is it all about?

What is the Mind, Mindfulness, and sure… What is meditation?

… not a real explanation of ANYTHING!
by Jeremy Davis

So the concepts of mindfulness and meditation are at the core of our community, and over the course of the last few weeks, we’ve presented many articles from our contributors and coaches which referenced these ideas within the context of philosophy, yoga, and their individual benefits, particularly in decreasing one’s stress, and improving one’s health holistically through wellness and awareness.

… but what do all these words mean?

When I founded just us… BEING!™, I had limited knowledge of this lifestyle as a layman.

My intention, (then as it still is now), is to answer one simple question.
Why are we, as human beings, in a constant state of doing ?

When I posed that question on Instagram, a response from one of my viewers acknowledge the quandary. He added “I know right! It’s like we’re called Human BEINGS, not Human DOINGS!”

After I giggled at his response, I took some time to reflect on the innate truth this soul had uttered, perhaps unknowingly. There in that simple interaction, just us… BEING!™ was born.

Now, we know that they say that the mind is a terrible thing to waste, sure. But what is the ‘mind’?

If you do a quick google search for the same phrase, here is what wiki has to say about it:

This just us… BEING!™ insert is a is a simple place where you can launch the basis of your research into this whole thing.

At just us… BEING!™ we are creating a cache of resources to support growth through both MINDFULNESS and MEDITATION

Our hope is that in presenting this information, BEINGS! in our community, and people connected to them can benefit from the soul change that it’ll bring, and one-by-one, bit-by-bit, we can do our part to change the mindset that we believe society is trapped in right now.

“All of humanity’s problems stem from man’s inability to sit quietly in a room alone.” 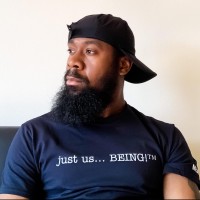 I consider myself a man of the world, sure. I enjoy art, music and culture, Some other things I really like include ice-cold drinks, peaceful nights in, long walks on the beach... and of course meditation! I always love to connect; people are gregarious beings, aren't we? Peace!

Light Reading for Mindfulness – just us… BEING!™ Reply

[…] you start reading this article, I recommend you preregister for our upcoming January Mindfulness Retreat in Barbados in partnership with Barbados Connect; we will be announcing the location very soon so […]

Is the Cacao Sacred?
Previous Article

STOP! | Pace Yourself.
Next Article

Home
About Us
Coach with Us
Courses
Journal

Become a Teacher
Partnership
Open a ticket
Contact Us
Find Us